The commercial property stock reached an all time high of £871 billion in 2015, according to Property Data Report produced by the Property Industry Alliance. The property stock covered includes office blocks, buildings for shops, industrial unit, warehouses and other types of buildings meant for retail, entertainment and public uses.

To put it in context, the commercial property’s value is equivalent to UK’s existing stock of machinery, vehicles and equipment. Interestingly, it is also comparable to 40 per cent of the country’s stock market. The commercial property market, thereby, is integral to UK’s overall real estate industry, and its role cannot be ignored at any stage.

Of the £871, retail sub-sector comprises the largest segment at 41 per cent while offices sub-sector is at a close second. The offices in London represent about 64 per cent of the total value of offices in the UK, reinforcing the view that the capital city also happens to be the financial capital of Europe.

According to the report, investors owned £483 billion of the UK’s commercial property and international investors accounted for 28 per cent of it, indicating the interest in the island nation’s real estate among overseas investors.

Retail – comprising shopping centres and out-of-town retail parks, as well as supermarkets, department stores and high street shops – is the largest commercial property sub-sector, accounting for 41% by value in 2015. 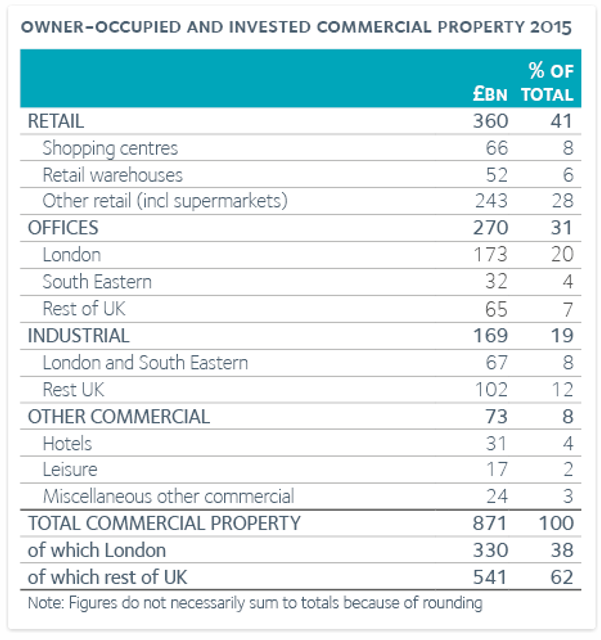