Even as market speculation over UK economy continues in the wake of Brexit, global real estate services firm JLL has predicted doubling of the prices of properties in London by 2030.

JLL analysed and forecasted average house price gain in each London borough from 2016 to 2030 by using Oxford Economics data based on Brexit. With even a relatively conservative view, the investment on properties in London will double by 2030, JLL found out.

The areas in London that might see the strongest growth are located in the east of London, led by Newham and Waltham Forest. It has attributed the likely doubling of prices in the east of London to Silicon Roundabout in Old Street, new Crossrail east-west commuter railway and Queen Elizabeth Olympic Park.

JLL figures showed that the growth of house prices in Europe’s financial capital over the past 35 years was 8 per cent on an average per annum despite three recessions. “While Oxford Economics’ forecasts represent a slight cooling of that price growth, they should still provide confidence that UK housing represents a sound long term investment with forecasted annual growth rates of between 4% and 7% pa depending on the borough,” JLL said.

It is imperative that investments on properties should be viewed from long-term perspective! If you are interested in acquiring a property in east of London, call our property experts at Strawberry Star office.

Within the confines of this scenario, Oxford Economics predicts the potential to double the value of a home in some parts of London by 2030. Particularly strong predicted areas of growth can be found to the east of the Capital with Waltham Forest and Newham leading the way. 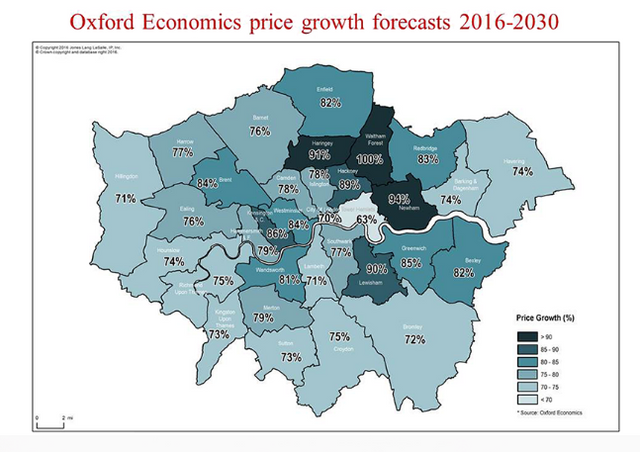 #Invest in the next trendy borough of #London #DEPTFORD with prices from £360k https://t.co/sHdaTcASFQ pic.twitter.com/O7owEaTkSf