Here’s some welcome development for investors in the Prime Central London property market. Average rental values across Prime Central London were unchanged for the second consecutive month in August, providing further evidence that a recent run of declines is bottoming out.

The fall in rental values in Prime Central London over the past two years has primarily been due to elevated levels of stock, which means that landlords have had to reduce rents to attract tenants, according to international real estate advisor Knight Frank.

Higher levels of rental properties are the result of slower activity in the sales market following a succession of tax hikes, however this trend has started to reverse as asking prices adjust and demand improves.

The latest monthly data contributed to an annual fall in average rental values of -3.4 per cent in August, which was the slowest decline in more than 12 months, according to Knight Frank’s Prime Central London Lettings Index for August 2017.

Some 45 per cent of landlords in central London have reviewed their portfolio size, according to analysis carried out by research company BDRC Continental in August. The findings tally with Knight Frank data, which shows there was a 6 per cent decline in the number of new rental properties coming onto the market in Prime Central London between January and July 2017 compared to the same period a year earlier.

The number of new prospective tenants registering with Knight Frank between January and July this year rose 13% and the number of viewings was up by 23% compared to last year. 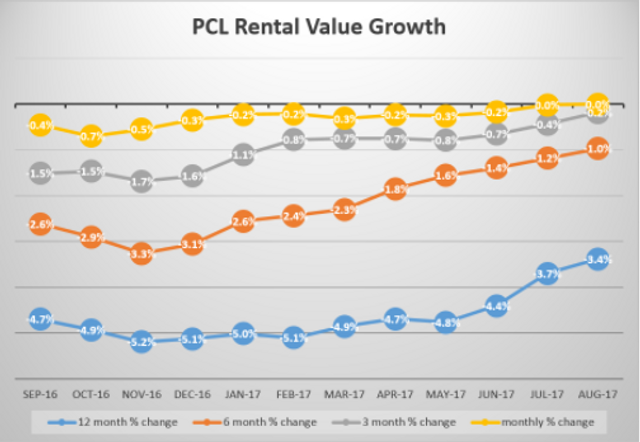