The demographic profile of the developed world is typically characterised by its ageing population, exemplified by the significant growth of the senior housing sector. However, property adviser Savills’ latest forecasts identify that in the next five years the UK will have the largest share of people aged 20 - 39 years in Europe, hosting the most ‘youthful’ cities on the continent. This is set to underpin growing demand for multi-family accommodation that caters to this burgeoning category of home buyers.

First time buyer (FTB) transaction activity has skyrocketed in the UK, with banks and building societies approving more mortgages to FTBs in March 2021 than any time since 2002, according to data released by UK Finance. Bank of England figures echo this trend alongside wider growth in mortgage lending demonstrated by a 3.6 per cent annual rise to the end of Q1 2021 relative to one year before.

In addition to this FTB segment, home movers in this demographic profile are exceptionally active with over a third of those aged 18 - 34 moving homes as a result of the pandemic and ensuing lockdowns. New research from Close Brothers Asset Management pegs this proportion at 36 per cent, compared to just 9 per cent of 55+ year olds and a UK average of 21 per cent.

Those in cities, such as London, are more actively seeking change with 38 per cent moving to pursue an improved quality of life. This pales in comparison to regions such as the North East where the figure is just 9 per cent. In the short run this younger demographic profile will seek to capitalise on the SDLT extension, continued competitive mortgage rates and the mortgage guarantee scheme for access to housing. In the long run, multi-family residential real estate aligns with affordability and accessibility constraints by maximising ease of living for high quality rental or home ownership.

These younger home buyers are concentrated in cities such as Slough and Luton, which harbour especially high shares of under-18s owing to high birth rates at 16.6 and 17.9 births for every 1,000 residents as reported by the BBC. With the youngest (Slough at 33.9) and third youngest (Luton at 35.1) populations in the UK, such cities are poised for significant growth in both sales and rental usage in the coming years.

LU2ON is an integrated mixed-use development ideal for London-based commuting professionals, home movers, BTL landlords, and first-time buyers in the UK capital’s top commuter belt town Luton. Amenities include a large public realm, gardens, a gym, boutique shops, restaurants and bars, as well as a 4-star hotel. Moreover, provisions are made to include a supermarket, childcare and a pharmacy. Call +44 20 7781 8899 to learn more or email: hello@lu2on.com

Across the UK, 42,330 mortgages were issued to first-time buyers in March, marking the highest monthly total since December 2002 when 44,000 were advanced, according to trade association UK Finance. 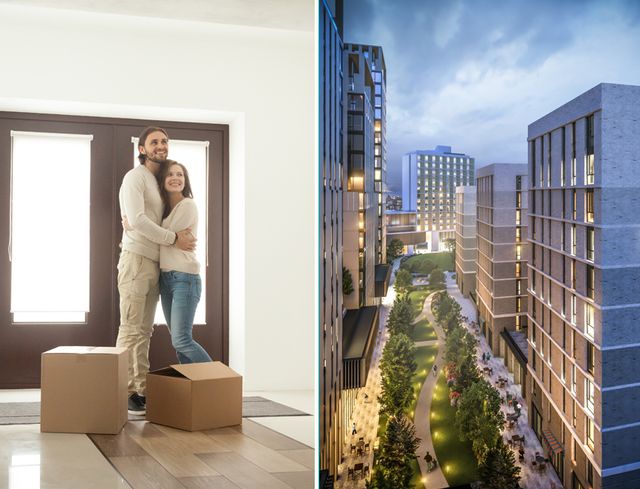